Today's post is by guest blogger Lynnette Arnold. Lynnette is a graduate student in the Department of Linguistics at UC Santa Barbara, where she is currently writing a dissertation focused on communication in transnational Salvadoran families. In addition to her academic research, she actively works towards immigration justice in a range of national and local settings. You can learn more about this work on her blog.

Language has been at the center of a heated debate in Santa Barbara over the past month. On January 3, 2015, the Santa Barbara News-Press ran a front-page story with the headline “Illegals Line Up for Driver's Licenses,” which reported on Assembly Bill 60, a California state law that had just gone into effect and which provides licenses to all state residents regardless of their immigration status. The headline was accompanied by a photo of Latinas/os waiting in line at the local DMV. 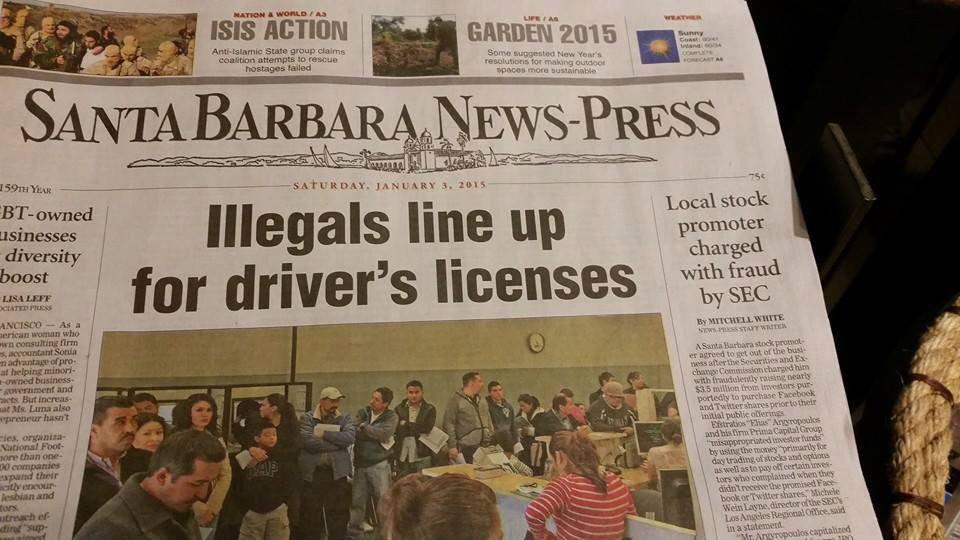 Members of the local Latina/o community were outraged by the use of the term “illegals” and launched an online petition on January 4 calling for the News-Press to “retract and apologize for your racist and hateful headline.” The petition noted that the newspaper’s use of the term "illegal" violated industry standards for journalistic language laid out in the Associated Press Stylebook, which recommends that "illegal" should only be used to refer to an action, not a person. Later that week, a group of about 200 people protested outside the newspaper’s office, chanting “News-Press, you’re a mess” (see also here and here for more coverage). The protesters continued to call for the retraction of the headline and gave the News-Press a deadline of January 19, Martin Luther King, Jr. Day, to issue a retraction. 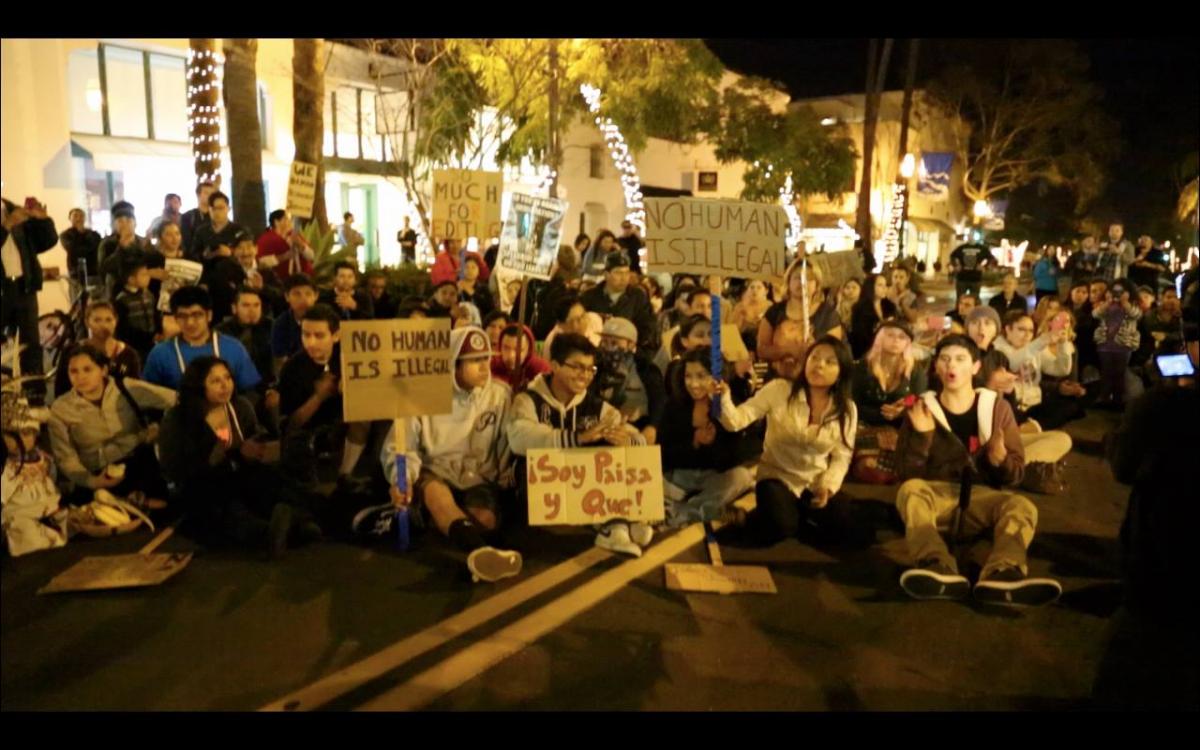 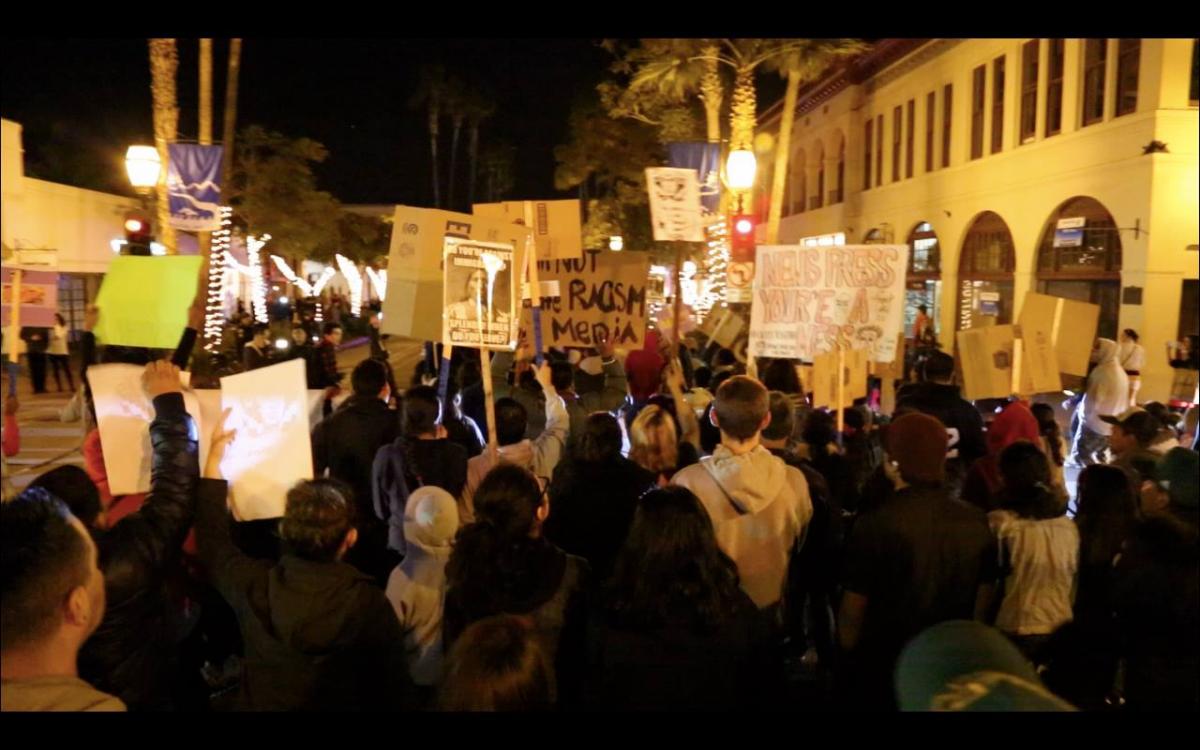 Instead of issuing a retraction, the News-Press published a second article on January 16 with the headline “Driving Legal Opens Door to Illegals’ Past.” Jim Gilchrist, founder of the virulently anti-immigrant Minuteman Project, issued a statement in support of the News-Press, while several other local news outlets published letters to the editor critiquing the newspaper’s use of this racially loaded term (see here, here, and here). A second protest on January 19, organized by the grassroots social justice group PODER Santa Barbara (People Organized for the Defense and Equal Rights of Santa Barbara Youth), called for a boycott of the News-Press, and this time the protesters were met with an opposing rally by the anti-immigration group We the People Rising. This Claremont-based organization is the same group that was behind the ugly protests in Murrieta this summer that prevented buses of young refugees fleeing violence in Central America from entering the town. 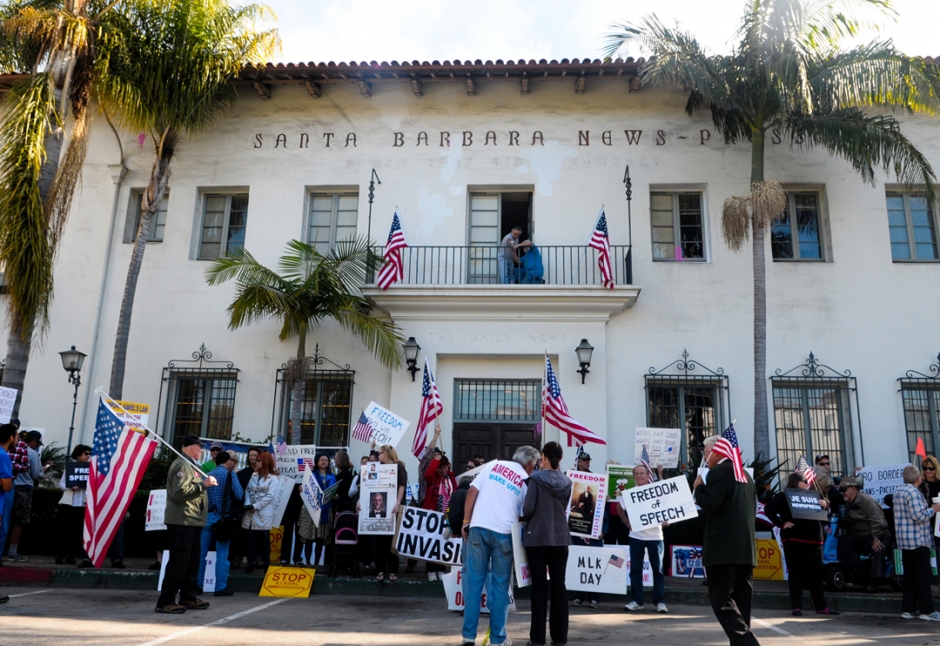 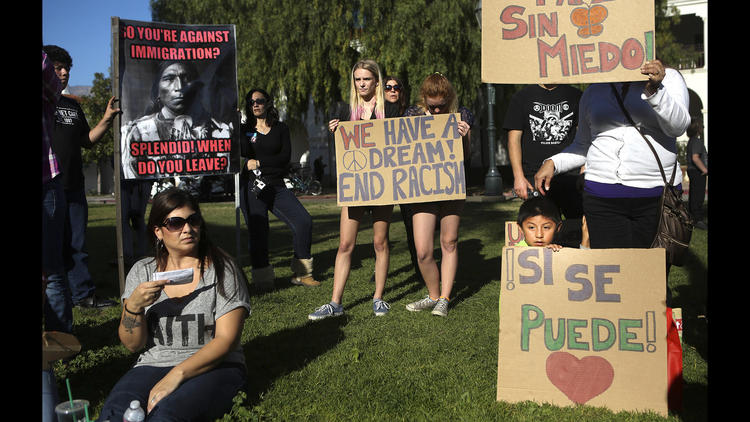 This local debate centers on language—the use of the term “illegal” to refer to a sociopolitically defined group—and as a scholar who studies the role of language in social life, I feel an ethical and intellectual imperative to contribute my perspective. Indeed, back in 2012, I was part of a larger group of linguistic anthropologists who issued a statement condemning the use of the term “illegal” to refer to migrants. The statement was authored by Jonathan Rosa, an assistant professor at the University of Massachusetts, Amherst (you can see him talk about these issues in an interview on the Melissa Harris-Perry show here). As part of a larger campaign to get newspapers to “drop the I-word,” the statement played an important role in convincing the Associated Press to change its Stylebook recommendations for use of this term in 2013. 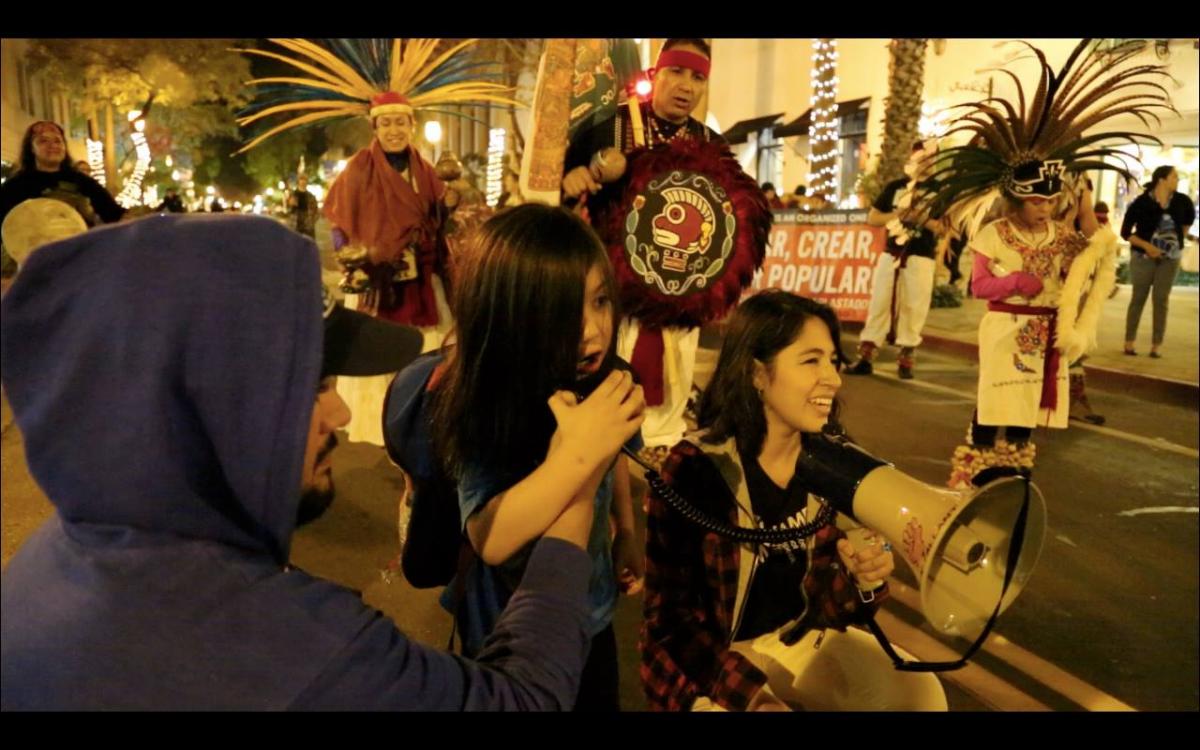 The goal of the “drop the I-word” statement is as relevant to the current controversy in Santa Barbara as it was in 2012. It called for shifting the terms of the debate, going beyond the question of whether “illegal” is an accurate or neutral journalistic term and instead seeing language as a form of social action. The crucial question to ask then becomes: What is it that linguistic representations of immigrants, such as those encoded in the term “illegal,” actually accomplish in the world? What does language do? Why does a single word matter?

Firstly, calling a migrant “illegal” reduces the entirety of a person’s being to their immigration status. This is like calling someone with cancer “cancerous,” as if that single aspect of their identity defined them. Of course we do not do this with people who have cancer, and a movement away from such labeling can be seen, for example, in the shift away from using the term “disabled,” and for the very same reason. Just as people living with an illness or a disability have rich lives with many other facets, so too do migrants without legal authorization have many other roles: They are mothers and fathers, workers, students, and children. 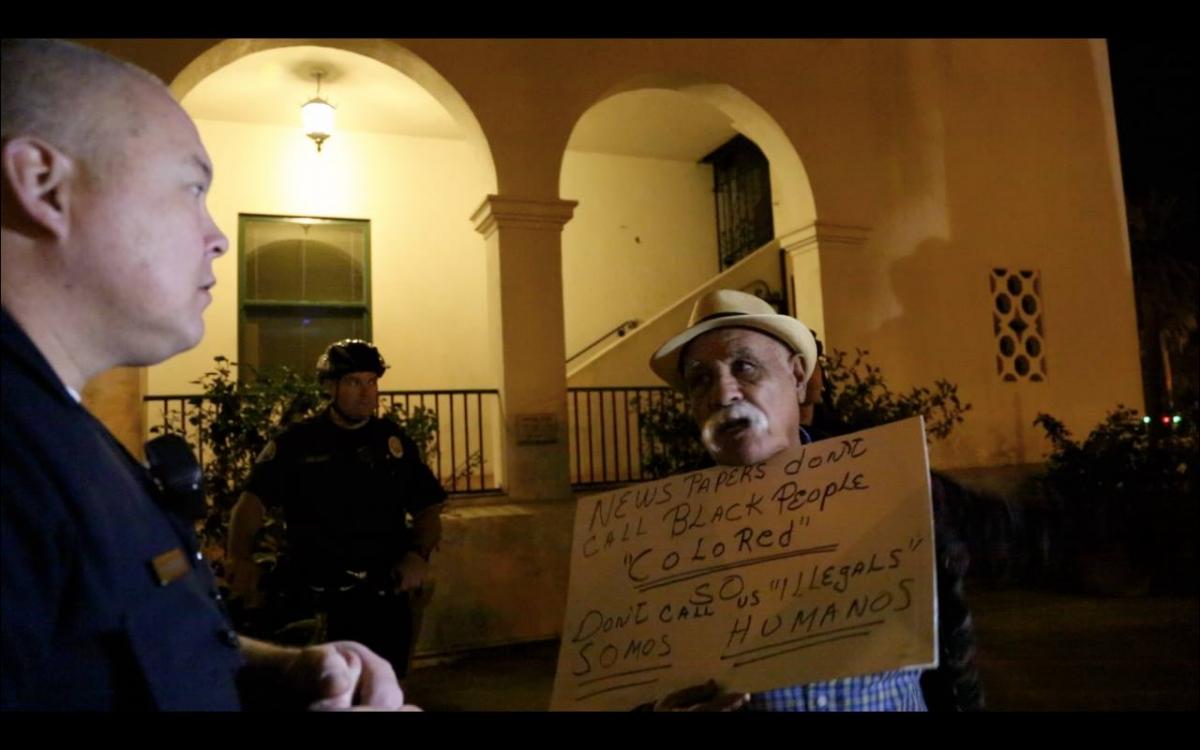 Relatedly, using the term “illegal” suggests a black and white binary in which immigrants choose to be either legal or illegal, ignoring the fact that for many migrants, immigration status changes over time. On a broader historical timescale, this representation also ignores the fact that immigration laws in the United States have undergone many dramatic shifts, as we saw most recently in President Obama’s declaration of Deferred Action for Parental Accountability in December 2014. Who exactly is deemed “illegal” at a given moment in history is constantly changing, and the idea that some people are inherently “illegal” erases these shifts.

Forms of representation matter. Using “illegal” to refer to migrants minimizes their full humanity and hides the changing sociohistorical forces that shape legal understandings of migration. These depictions have consequences far beyond simple talk. Minutemen patrol the border carrying automatic weapons and sporting bumper stickers that read “illegal immigrant hunting permit,” while early-morning immigration raids tear mothers away from their young children, and ethnically motivated hate crimes overwhelmingly target Latinos/as. Such are the daily realities that indiscriminate use of the term “illegal” promotes.

The concluding paragraph from the statement by the linguistic anthropologists perfectly sums up my response to the current debate in Santa Barbara (you can read the full statement here):

We must recognize that this debate is not merely a matter of policing language, or deciding whether one word or phrase is better than another. … Simply replacing “illegal” with another term will not eradicate the legal conflations, historical erasures, ethnolinguistic profiling, and acts of violence described above. Only an understanding of how language functions as social action will allow us to develop new terminology that challenges anti-immigration perspectives successfully. While language change is not necessarily equivalent to social change, struggles over representations of immigration make it possible to imagine and enact an alternative politics of inclusion in this nation of immigrants.

At the heart of the debate, then, lies not the issue of free speech, as the News-Press and its apologists would have it, but rather a concern with what language does. We all make choices every day about how to use language: Those choices matter and have real consequences for the lives of real people. Thus, I encourage the editors of the News-Press, and all of us, to think carefully about what actions we want our words to carry out—in the words of a chant at the second Santa Barbara protest, to speak and act with “Love, Not Hate.”